Restricted Boltzmann Machines:
Geoff Hinton of the University of Toronto, a pioneer and giant in the field, was able to devise a method for training deep nets. His work led to the creation of the Restricted Boltzmann Machine, or RBM.
Structurally, an RBM is a shallow neural net with just two layers – the visible layer and the hidden layer. In this net, each node connects to every node in the adjacent layer. The “restriction” refers to the fact that no two nodes from the same layer share a connection.

If you’ve ever worked with an RBM in one of your own projects, please comment and tell me about your experiences.

Because RBMs try to reconstruct the input, the data does not have to be labelled. This is important for many real-world applications because most data sets – photos, videos, and sensor signals for example – are unlabelled. By reconstructing the input, the RBM must also decipher the building blocks and patterns that are inherent in the data. Hence the RBM belongs to a family of feature extractors known as auto-encoders. 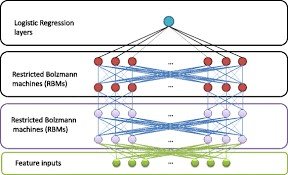 Deep Belief Networks:
The Deep Belief Network, or DBN, was also conceived by Geoff Hinton. These powerful nets are believed to be used by Google for their work on the image recognition problem. In terms of structure, a Deep Belief is identical to a Multilayer Perceptron, but structure is where their similarities end – a DBN has a radically different training method which allows it to tackle the vanishing gradient.

The method is known as Layer-wise, unsupervised, greedy pre-training. Essentially, the DBN is trained two layers at a time, and these two layers are treated like an RBM. Throughout the net, the hidden layer of an RBM acts as the input layer of the adjacent one. So the first RBM is trained, and its outputs are then used as inputs to the next RBM. This procedure is repeated until the output layer is reached.

Have you ever used this method to train a Deep Belief Network? Please comment and let me know your thoughts.

After this training process, the DBN is capable of recognizing the inherent patterns in the data. In other words, it’s a sophisticated, multilayer feature extractor. The unique aspect of this type of net is that each layer ends up learning the full input structure. In other types of deep nets, layers generally learn progressively complex patterns – for facial recognition, early layers could detect edges and later layers would combine them to form facial features. On the other hand, A DBN learns the hidden patterns globally, like a camera slowly bringing an image into focus.

In the end, a DBN still requires a set of labels to apply to the resulting patterns. As a final step, the DBN is fine-tuned with supervised learning and a small set of labeled examples. After making minor tweaks to the weights and biases, the net will achieve a slight increase in accuracy.

This entire process can be completed in a reasonable amount of time using GPUs, and the resulting net is typically very accurate. Thus the DBN is an effective solution to the vanishing gradient problem. As an added real-world bonus, the training process only requires a small set of labelled data.

Convolutional Neural Networks:
CNNs are deep nets that are used for image, object, and even speech recognition. Pioneered by Yann Lecun at New York University, these nets are currently utilized in the tech industry, such as with Facebook for facial recognition. If you start reading about CNNs you will quickly discover the ImageNet challenge, a project that was started to showcase the state of the art and to help researchers access high-quality image data. Every top Deep Learning team in the world joins the competition, but each time it’s a CNN that ends up taking first place.

A CNN tends to be a difficult concept to grasp. If you’ve ever struggled while trying to learn about these nets, please comment and share your experiences.

CNNs have multiple types of layers, the first of which is the convolutional layer. To visualize this layer, imagine a set of evenly spaced flashlights all shining directly at a wall. Every flashlight is looking for the exact same pattern through a process called convolution. A flashlight’s area of search is fixed in place, and it is bounded by the individual circle of light cast on the wall. The entire set of flashlights forms one filter, which is able to output location data of the given pattern. A CNN typically uses multiple filters in parallel, each scanning for a different pattern in the image. Thus the entire convolutional layer is a 3-dimensional grid of these flashlights.

Connecting some dots
- A series of filters forms layer one, called the convolutional layer. The weights and biases in this layer determine the effectiveness of the filtering process.
- Each flashlight represents a single neuron. Typically, neurons in a layer activate or fire. On the other hand, in the convolutional layer, neurons search for patterns through convolution. Neurons from different filters search for different patterns, and thus they will process the input differently.
- Unlike the nets we've seen thus far where every neuron in a layer is connected to every neuron in the adjacent layers, a CNN has the flashlight effect. A convolutional neuron will only connect to the input neurons that it “shines” upon.

The convoluted input is then sent to the next layer for activation. CNNs use backprop for training, but because a special engine called RELU is used for activation, the nets don’t suffer from the vanishing gradient problem.

In real world applications, image convolution results in 100s of millions of weights and biases, which has an adverse effect on performance. Thus after RELU, the activations are typically pooled in an adjacent layer to reduce dimensionality. Afterwards, there is usually a fully connected layer that acts as a classifier.

CNNs that are in use typically have an architecture with repeated sets of layers. Set 1 is a convolutional layer followed by a RELU. This set can be repeated a few times, and the repeated structure is followed by a pooling layer. This resulting combination forms set 2, which is also repeated a few more times. The final resulting structure is then attached to a fully connected layer at the end. This architecture allows the net to continuously build complex patterns from simple ones, all while lowering computing costs with dimensionality reduction.

CNNs are a powerful tool, but there is one drawback – they require 10s of millions of labelled data points for training. They also must be trained with GPUs for the process to be completed in a reasonable amount of time.

Recurrent Neural Networks:
The Recurrent Neural Net (RNN) is the brainchild of Juergen Schmidhuber and Sepp Hochreiter. The three deep nets we’ve seen thus far – MLP, DBN, and CNN – are known as feedforward networks since a signal moves in only one direction across the layers. In contrast, RNNs have a feedback loop where the net’s output is fed back into the net along with the next input. Since RNNs have just one layer of neurons, they are structurally one of the simplest types of nets.
Like other nets, RNNs receive an input and produce an output. Unlike other nets, the inputs and outputs can come in a sequence. Here are some sample applications for different input-output scenarios:
- Single input, sequence of outputs: image captioning
- Sequence of inputs, single output: document classification
- Sequence of inputs, sequence of outputs: video processing by frame, statistical forecasting of demand in Supply Chain Planning
Have you ever used an RNN in one of your projects before? If so, please comment and tell us about your experience.
RNNs are trained using backpropagation through time, which reintroduces the vanishing gradient problem. In fact, the problem is worse with an RNN because each time step is the equivalent of a layer in a feedforward net. Thus if the net is trained for 1000 time steps, the gradient will vanish exponentially as it would in a 1000-layer MLP.
There are different approaches to address this problem, the most popular of which is gating. Gating takes the output of any time step and the next input, and performs a transformation before feeding the result back into the RNN. There are several types of gates, the LSTM beig the most popular. Other approaches to address this problem include gradient clipping, steeper gates, and better optimizers.
GPUs are an essential tool for training an RNN. A team at Indico compared the speed boost from using a GPU over a CPU, and found a 250-fold increase. That’s the difference between 1 day and over 8 months!
A recurrent net has one additional capability – it can predict the next item in a sequence, essentially acting as a forecasting engine.

Backpropagation:
When we use a feedforward neural network to accept an input x and produce an output ^y, information flows forward through the network. The input x provides the initial information that then propagates up to the hidden units at each layer and finally produces ^y. This is called forward propagation. During training, forward propagation can continue onward until it produces a scalar cost J(theta).
The back-propagation algorithm (Rumelhart et al., 1986a), often simply called backprop, allows the information from the cost to then flow backward through the network in order to compute the gradient.
Computing an analytical expression for the gradient is straightforward, but numerically evaluating such an expression can be computationally expensive. The back-propagation algorithm does, so using a simple and inexpensive procedure.

The term back-propagation is often misunderstood as meaning the whole learning algorithm for multi-layer neural networks. Actually, back-propagation refers only to the method for computing the gradient, while another algorithm, such as stochastic gradient descent, is used to perform learning using this gradient.
Furthermore, back-propagation is often misunderstood as being specific to multilayer neural networks, but in principle it can compute derivatives of any function (for some functions, the correct response is to report that the derivative of the function is undefined).
Specifically, we will describe how to compute the gradient delta(xf(x, y)) for an arbitrary function f, where x is a set of variables whose derivatives are desired, and y is an additional set of variables that are inputs to the function but whose derivatives are not required.
In learning algorithms, the gradient we most often require is the gradient of the cost function with respect to the parameters, deltathetaJ(theta). Many machine learning tasks involve computing other derivatives, either as part of the learning process, or to analyze the learned model. The back-propagation algorithm can be applied to these tasks as well and is not restricted to computing the gradient of the cost function with respect to the parameters.
The idea of computing derivatives by propagating information through a network is very general and can be used to compute values such as the Jacobian of a function f with multiple outputs. We restrict our description here to the most commonly used case, where f has a single output. 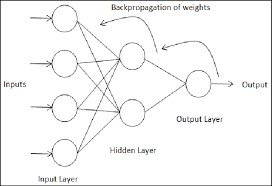