Introduction:
From the previous article, you have got that there are different variants of esp-0X(X=0,1..12E) modules. If we want to operate more sensors or modules through these esp modules, there are not enough GPIO pins.
For this, there are two solutions.
1. We should connect the esp modules to another microcontroller(Ex: Arduino). So that we can connect more devices.
2. There are few microcontrollers which have built-in SoC like NodeMCU, Wemos-D1. We can use this type of microcontroller’s.
There are two versions of nodemcu, which we can differentiate easily. One appears in black colour as shown in below which is the latest version V1.0(version 2), another is v0.9 (version1) which appears in blue colour. 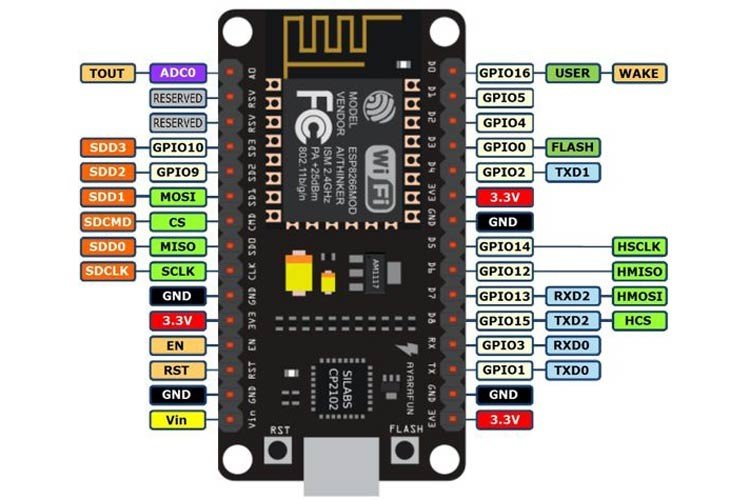 ●We can observe the pin diagram as shown in the above figure, the pin numbers are different. If we want to use the pin D0, we should mention 16 in the programming with Arduino IDE.
●NodeMCU is 3.3V, it is not tolerant to 5V.
●There is only one analog output(A0) in the board.
●There are 16 GPIO’s(GPIO and Digital pins are not the same), which consists of UART, SPI, I2C, etc.
●It is a 32-bit Microcontroller.
●Flash Memory 4KB
●Clock Speed - 80MHz.
●It has two UART interfaces UART0(RXD0 & TXD0) and UART1(RXD1 & TXD2). Generally UART1 is used to upload the firmware/program.
●The EN pin and the RST button resets the microcontroller.
●The pin D0 or GPIO-16 can be used for sleeping modes for low power consumption in NodeMCU.
Programming with NodeMCU:
There are several Integrated Development Environment(IDE’s) for programming. Two of them are:
1. NodeMCU with ESPlorer IDE:
Lua scripts are generally used to code the NodeMCU. Lua is an open source, lightweight, embeddable scripting language built on top of the C programming language.
2. NodeMCU with Arduino IDE:
Here is another way of developing NodeMCU with a well-known IDE i.e. Arduino IDE. We can also develop applications on NodeMCU using the Arduino development environment. This makes it easier for Arduino developers than learning a new language and IDE for NodeMCU. For more information about Arduino IDE with NodeMCU click getting started with NodeMCU.
Difference between ESPlorer and Arduino:
Well, there is a programming language difference we can say while developing applications for NodeMCU using ESPlorer IDE and Arduino IDE. We need to code in C\C++ programming language if we are using Arduino IDE for developing NodeMCU applications and Lua language if we are using ESPlorer IDE. Basically, NodeMCU is Lua Interpreter, so it can understand Lua scripts easily. When we write Lua scripts for NodeMCU and upload it to the NodeMCU, then they will get executed sequentially. It will not build a binary firmware file of code for NodeMCU to write. It will send Lua script as it is to NodeMCU to get executed. In Arduino IDE when we write and compile code, ESP8266 toolchain in the background creates a binary firmware file of code we wrote. And when we upload it to NodeMCU then it will flash all NodeMCU firmware with newly generated binary firmware code. In fact, it writes the complete firmware. That’s the reason why NodeMCU does not accept further Lua scripts/code after it is getting flashed by Arduino IDE. After getting flashed by an Arduino sketch/code there will be no more Lua interpreter and we get errors if we try to upload Lua scripts. To again start with Lua script, we need to flash it with NodeMCU firmware. Since Arduino IDE compiles and upload/writes complete firmware, it takes more time than ESPlorer IDE.